(in Hindi शौनक चक्रवर्ती and in Bengali শৌনক চক্রবর্তী) is an Indian writer,[1] author,[2][3]poet, social worker[4] and the founder of Gyaanipedia was born on 23 December 2000 in India's former capital Kolkata which is the present capital of Indian state West Bengal. He is popularly known for his poems written in India's national language Hindi.[5][6] He is the chairperson of Fridays For Future Virtual.

The early life of Shaunak Chakraborty was full of pain and tragedies as his mother was not well, she was admitted to Eastern Command Military Hospital for three years (year 2000 - 2003). Shaunak's aunt Rupali Samaddar and home maid Rajni Kumari had done a lot for him for the initial three years of his life.

The initial three years of Chakraborty's life is probably the hardest portion of his life. At first he got hate from his own family members as they demand a girl child but Chakraborty is a boy. So they use to wear him female cloths. 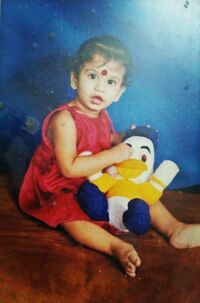 Master Chakraborty is a very soft hearted and caring person in his personal life, he is always ready to help people who are in need. He never say no to that person who have expectation from him. He will give his hundred percent to help the person.

He is having various health issues as he is suffering from Asthma since he was three years old.

He he suffering from health issues since his childhood but 2014 was the most dangerous year of his life as his Asthma was in a very dangerous stage, no medicine was working in body at last the doctors recommend Strode the strongest drug then it effects.

In September 2018, Chakraborty was suffering from bladder infection, he reported a severe type of pain during the passing of urine. Doctors told him to drink water as much as he can but he couldn't able to do that as going to toilet again an again and face the pain was not an easy task. He was drinking a very less amount of water that's why he faces the problem of constipation. He noticed that his stool was not passed since three days. At the initial stage he tried medicines like Pet King and Issaabgul but it didn't effect on him. Then after 1 week a doctor suggested him some medicines he tried it and finally his stool got passed.

On 14 October 2018 Master Chakraborty feeled a kind of sickness in his body while sitting at Sahu Park Air Force Station Jodhpur. On the nextday at evening time he was feeling very uncomfortable so he went to the Station Medical Center of Air Force and they gave Paracetamol as the doctors were no there. On the sameday at night time Air Force personnel CPL P. Rajesh measured and find out that he is having 101 fever. Chakraborty reported to SMC with CPL Rajesh next day. While describing his status to Lady Medical Officer suddenly he was feeling very uncomfortable, Rajesh hold him and immediately took him to the Emergency ward but before entering there he got senseless, Rajesh pick him up and ran inside. Dr. K Anthony immediately told CPL Laksha to process a bottle of saline water. Within half an hour his mother Sharmistha Chakraborty reached here Dr. Anthony recommend for a check up at Military Hospital Jodhpur. He and he mother reached there by an Air Force Ambulance. There the dengue case was reported and he was immediately admitted to the hospital. He was discharged after six days, on 21 October 2018.

He is now working on his upcoming book Uttarakhand 2013

His talent of writing came in front of the world when he was in seventh standard, his sister copied a poem from internet shows it to everyone than all the family members said out standing, very good, etc to her but Shaunak knew it very well that this is a copied poem, he challenged her and wrote his first poem of his life that is 'Suraj Dada'. That poem got popular after two years that is 2015, by this his talent of writing came out. 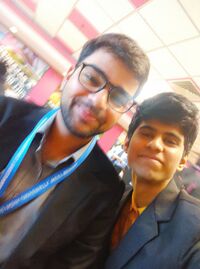 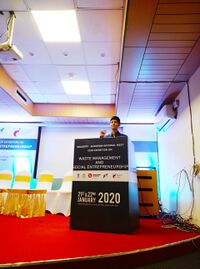 Chakraborty participated in the Waste Management and Social Entrepreneurship Confrence which was organized by TIU from 21 - 23 January 2020. 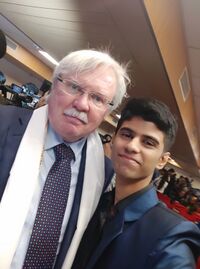 Shaunak Chakraborty with Deputy Consulate of Republic of German

Chakraborty meet the Deputy Consulate of Republic of German during this Waste Management Conference and discuss some prominent factors of the waste management process and the 3Rs i.e Reduce, Reuse and Recycle.

While this conference Chakraborty has given his time to media also and discuss about some of the innovative ideas and initiatives to reduce the waste from our world.

Retrieved from "https://en.gyaanipedia.com/w/index.php?title=Shaunak_Chakraborty&oldid=406047"
Categories:
Cookies help us deliver our services. By using our services, you agree to our use of cookies.