The slogan of this wiki is Shows The Unseen Side.[1] As it also import that pages which were rejected and deleted from Wikipedia . Initially this website is created specially for Indians but later it was available for all as gaining popularity and traffic. It is much like Deletionpedia. 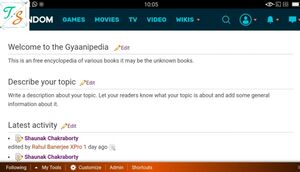 Since 2016 Shaunak Chakraborty is watching the Indian people who are struggling to create a page in Wikipedia, but we all knew it very well that how much difficult it is. He develop sympathy for those people of his nation and want to do something for them. On 1 April 2018 he invited his school juniors Anandita Bist, Sai Gaurav, Daksh, Akansha Kumari and Tejas for a group discussion on this topic, they suggested to create a site like Wikipedia. It was too difficult to create a same site. On 25 July 2018 Shaunak Chakraborty visited to a website makers for some suggestions, he told him the entire process that how he can create a site like Wikipedia. On 16 August 2018 Gyaanipedia Foundation was formed by Shaunak Chakraborty. Under this foundation finally the website Gyaanipedia was formed on 30 August 2018 which was an online historical day for those struggling people of India. This site was formed under Wikia[2] which was powered by Fandom, then the MediaWiki site was finally launched on 31 October 2018. The first Indian online encyclopedia with no restrictions and also it is the first wiki website which have IST (Indian Standard Time) time zone. It works under the same Mediawiki open source software which Wikipedia is using. On 09 November 2018 the Hindi[3] and Bangla[4] version was launched, on 12 November 2018 Telugu[5] version was launched.

Initially some of the Gyaanipedia versions are hosted on Wikia therefore many domains are ending with Wikia.com, the first wiki has the domain https://gyaanipedia.wikia.com but in late 2019 it was changed to fandom.com as it was the decision of the company. Due to this change many wikis with less articles has been deleted from Fandom.

At the initial days of Gyaanipedia, the wiki struggled a lot to gain a uprising statistics but always failed to do so. After completion of six months of this wiki that was March 2019 it started gaining the attention of the strugglers and the less popular people. The article creation process suddenly speeding up. Shaunak Chakraborty was the first person to complete 1000 articles as well as edits on the wiki. 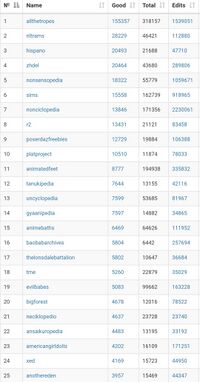 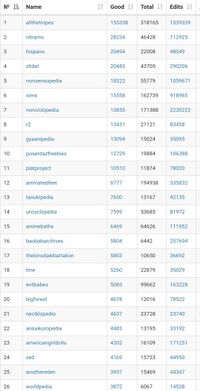 Usually the contents of Gyaanipedia is free and under Creative Commons license but some contents like deleted pages of Wikipedia which were imported to the site are not free. There are some topics on which no one can reproduce it or write it in different form so for those articles, permission is taken from the actual author of the content.

Due to Coronavirus disease 2019 pandemic Gyaanipedia has organised various awareness campaigns online to make the people alert and aware throughout the world. Some of the campaigns are as follows:

Gyaanipedia launched the campaign Justice For George Floyd on 30 May 2020, protesting against the criminal police officer who has murdered an African American citizen George Floyd by applying 3rd degree, pressing his neck from his knees.

In August 2020 after an user become administrator of Gyaanipedia due to his efforts and contributions, he started to copy exactly the same content from Wikipedia and other sites, which is known as vandalism. Due to this sudden change in his attitude, the team Gyaanipedia becomes anxious and confused. The owner Shaunak Chakraborty was totally confused why he was doing this. This vandalising activities reached to such peak that Miraheze has globally blocked him.

After getting blocked he made a duplicate site of Gyaanipedia with same pronounciation at Wikia but with a slightly different name Ganipediya. All the layout of that site was exactly the same. Later he found to be an administrator and Bureaucrat of the site Uncyclopedia.[6]

Gyaanipedia is hosted by the Gyaanipedia Association, a non-profitable organization that also hosts a range of other projects.

On 01 April 2020 the site was blocked the people of China from accessing it's content as many countries were not in support of China.

Retrieved from "https://en.gyaanipedia.com/w/index.php?title=Gyaanipedia&oldid=406350"
Categories:
Cookies help us deliver our services. By using our services, you agree to our use of cookies.