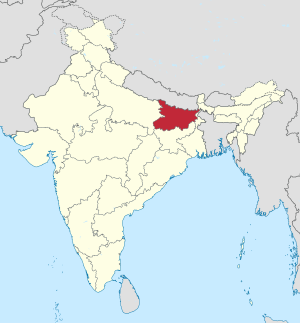 Bihar (/bɪˈhɑːr/; Hindustani pronunciation: [bɪˈɦaːr]) is an Indian state considered to be a part of Eastern as well as Northern India. It is the thirteen-largest Indian state, with an area of 94,163 km2 (36,357 sq mi). As the third-largest state by population, it is contiguous with Uttar Pradesh to its west, Nepal to the north, the northern part of West Bengal to the east, with Jharkhand to the south. The Bihar plain is split by the river Ganges which flows from west to east. Bihar is an amalgamation of three distinct regions: Magadh, Mithila, and Bhojpur.

Retrieved from "https://en.gyaanipedia.com/w/index.php?title=Bihar&oldid=88410"
Category:
Cookies help us deliver our services. By using our services, you agree to our use of cookies.